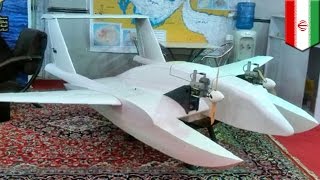 IRAN — On October 26, Iran’s Navy released photographs of a specialized seaplane drone that can reportedly be weaponized for targeted kamikaze missions.

Iran’s new seaplane drone can be armed with missiles and heavy payloads of explosives to launch suicide attacks. If directed, it can collide with any target and destroy it, be it a vessel at sea or an onshore command center.

Fitted with a camera that can be used at night and in “damp sea conditions,” the drone can operate for up to four hours straight at a maximum speed of 250 km per hour. The unmanned aircraft can fly as high as 3000 feet in the air, as low as 20 inches above the surface, and can land on water.

The drone is said to have been developed primarily for maritime surveillance, and is not necessarily designed to carry a missile payload.
—————————————-­———————

Welcome to TomoNews, where we animate the most entertaining news on the internets. Come here for an animated look at viral headlines, US news, celebrity gossip, salacious scandals, dumb criminals and much more! Subscribe now for daily news animations that will knock your socks off.

Get top stories delivered to your inbox everyday: http://bit.ly/tomo-newsletter
See a story that should be animated? Tell us about it! Suggest a story here: http://bit.ly/suggest-tomonews